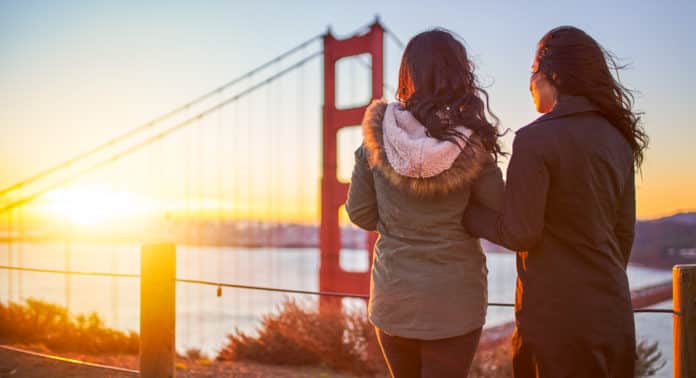 San Francisco is the place to be if you’re looking to spend a lot of cash.

It’s the most expensive city in the USA, if not the whole world. But also it’s also a great place to get laid.

Being the center of the tech boom, it’s full of highly paid and highly intelligent young professionals, and it’s flooded with money. San Francisco is very densely populated, and it almost feels like you are in a European city.

Getting laid in this city is going to cost you because the accommodation is relatively expensive. What’s great about it is that you’re going to meet a lot of foreign chicks that just moved there.

Still, the pure cost of living can be brutal, and the local women aren’t that interesting. In fact, they are quite infected with feminism and liberal.

Since San Fran girl are so “progressive”, you might not be interested in rocking those chicks world (but there might still be some rocking since earthquakes do happen in San Francisco).

Unless you’re going to live in San Francisco to earn some big bucks, avoid the Bay Area. It’s a huge sausage fest. Now, if you’re in tech, this city might be your best destination. But if you just want to visit a place to score hot chicks, Chicago is a much better choice.

This article is here to help you get the most out of your trip to San Francisco when it comes to getting laid. You will learn all about its nightlife and the day game. So, let’s get right to the point and see what we’re dealing with.

If you’re into open-minded, and well-traveled girls, then you’re in the right place. There are a lot of hot chicks in San Francisco and getting to meet them isn’t the problem…

Is it worth it? Well, they can be quite beautiful, so if the fact that they are often liberal doesn’t bother you, it can be. The thing about these girls is that they tend to say “maybe” instead of “no” and “yes” instead of “maybe.” So keep that in mind before you get your hopes up about a certain “maybe.”

This also means that they are flaky. Don’t get satisfied with their number, always go for the kill! One night stands are not taboo here, so always have in mind that it’s usual here to just pick up a girl from a Nightclub or street and bring her home.

Still, if you don’t like San Francisco girls, don’t worry so much about it, cause you can always date foreign girls and stay away from the bars with hipsters. There is a decent choice of blonds from LA, and you can get your pick of girls from Europe.

And if you’re loaded and have a thing for sophisticated girls or big butt Asian chicks, this city is the right choice for you.

Let’s be honest here, San Francisco has a bad rep in the dating world, but you can have fun despite that fact. If you are a true player, you’ll find a chick or two you’d enjoy picking up.

How to get laid in San Francisco

Even though you’ll meet lots of hot single girls, you have to be aware that this isn’t such a hard-partying city as Las Vegas .

Still, you’ll get to have your pick of lots of different girls willing to get laid with you. From my personal experience, it’s best that you avoid places where hipsters hang out and avoid feminist women that will bore you to death.

Have fun with a hot blonde from LA or have your taste of girls from Europe or Asia. There are a lot of Asian chicks in San Francisco, so if you’re into that, you’ll enjoy yourself in this city. But if you prefer white girls, you’ll be unhappy with the choice of a lot of 6s and bellow, even in such popular places as Marina.

Now, the good news about dating the chicks from San Francisco is that they are okay with keeping things casual. One night stands might not be extremely common, but they are definitely not rare.

You have your choice of nightclubs, bars, dating spots, as well as online dating sites, so get right on it.

One thing you need to remember is that the girls here won’t mind having sex without a condom. But don’t play around. Always wrap it up!

During the week, Westfield/Union Square is the most popular choice for day game.

Hit the Marina Green/Fort Mason on weekends to pick up hot chicks. And if you want even a wider choice of girls, try Dolores Park, which is super crowded on Sundays.

We haven’t even got to the sweetest part. You can have your pick of university girls if you go to the UC Berkeley campus, where these girls hang out in parks or cafes. It might be outside of town, but it’s a sure thing.

Don’t be shy and feel free to approach a girl on the street with the simple “Hello.” Usually, it’s just enough for you to start a good conversation.

See how it goes from there, and don’t give up if you get rejected once or twice. Girls in this city love guys that are persistent and relentless. Remember that.

We already mentioned Union Square, and there are a lot of clothing stores, a big mall, and a few coffee shops in the area. That makes it a very popular place for girls to visit and you can have your pick.

The bad thing about the nightlife in this city is that the last call is at 2 AM.

Still, that gives you a chance to take the girl to your place to continue partying. After all, this rule applies in all the cities of California, and you don’t want to lose your shot with California girls just because of it. If this makes you lose your hope, don’t worry because there are actually clubs that are open until 4 AM and other underground places. Still, the quality of those places is very low, so it’s not really worth it.

Pro tip: Good thing about this is that at 2 AM girls just want to continue to have fun, especially foreign girls, so “Let’s go to the afterparty to our place” is a good line at 2 AM.

The best time to pick up girls is after the sunset when they already have a couple of drinks in them just like you. Polk Street has a lot of venues, and it’s a great nightlife district. It also gives you an opportunity of renting a room if you can afford it, so you can keep partying after 2 AM. Marina and North Beach are other good choices for quality nightlife.

San Francisco is a pretty safe place for visitors, but there are parts of it you should avoid. The crime rate is lower than in other popular cities of the USA, such as New Orleans and Las Vegas. Still, car break-ins are a very common crime in this city. So, it’s best that you don’t bring a car.

Homelessness is another big problem in San Francisco. Maintain a safe distance and avoid confrontations when you run into the homeless people. Call the police if there’s an emergency or a crime regarding the homeless. There are neighborhoods that are tricky to navigate, so make sure that you know where you’re going.

All in all, San Fran girls are not top-notch quality but they are liberal enough to make getting laid in San Francisco easy.

Try to find girls that are from LA and if you love Asian women, you will have a lot of them here.

Always keep in mind that sex and one night stands are common and socially accepted in San Francisco.

Good luck and have fun.