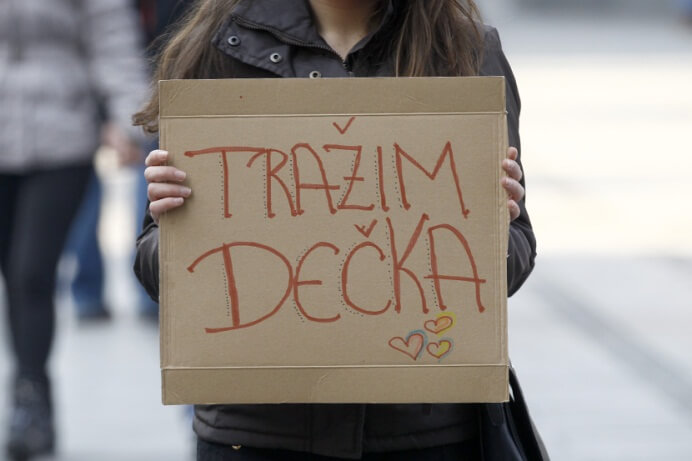 One of my students from Eastern Europe translated this news to me, thinking it would be a good story for my blog. And I decided to post it for you since it’s relevant for male-female social dynamics. The point was that a girl decided to do an experiment. She went to the most crowded street in Serbia to stand with a sign that says, “I’m looking for a boyfriend.” Let’s see what she has to say and what were the reactions.

“Six days after my departure to Belgrade and standing with a sign that says, “I’m looking for a boyfriend,” I can say with pride that I achieved my task. For all those that don’t know, the goal wasn’t actually to find a boyfriend. The core of this experiment was to find out how men would react to such an open message, how they behave, are they brave enough and how much of a gentleman they really are.”

Fair enough, she wants to see how much she can get away with being needy. Or to be more precise, how many guys are so desperate for any female attention that they will approach a girl begging for a commitment. While it takes courage for this, she doesn’t feel any shame what so ever. Also, pay attention on how she rationalizes this. Her hamster is spinning that wheel. Just replace word “brave” for needy and “gentleman” for a beta male, because, who on earth would think that a girl who is begging for commitment is a good LTR material?

“I have to admit that I was really thrilled and positively surprised with the reactions. The stronger gender showed courage, kindness, decisiveness and above all, understanding because not a single man that approached me got angry after I told them that I was just a reporter.

One hour after this text was published, I read so many comments and saw that most of them are positive. I couldn’t believe how many people supported me. On Facebook, requests started to come in so many numbers. Men and women of all ages.

I was even invited to be a guest on a few radio and television shows, which I gladly accepted. Colleagues from different media groups contacted me to share my experience with them.”

Everyone is cheering her. Supporting her. Poor journalist. Now imagine for a moment, that a guy does that. Holds up a big sign “I’m looking for a girlfriend.” What would people think? Would they support him, or laugh at him?

“One girl was especially funny, she wrote:

So, after a lot of great and kind words, I got many invites for a tea, coffee, dinner or just to go on a date.

Men, besides those that sent me positive comments, were interested in going out on a date with me. This has just confirmed what I already knew – people should be more open. Not too much, not always, not with everyone. But, when we talk about men-female relationships, the girl is the one that should give the signal that she likes someone and with that, make further actions possible.”

This is where it gets interesting. Not only guys asked for her number but some of them also offered her a dinner! How easy it is for women to get wined and dined?

If a girl wants a boyfriend and a beta, she could just let everyone know and guys would offer her commitment. She has shown clear desperation, and there were still guys that wanted to buy her dinner.
All I can say to this is that men are in big trouble.  We all know that today’s men are desperate and needy, but this is some new level. Unless we spread the TRP philosophy to more people and try to change the rules, the future is very dark. 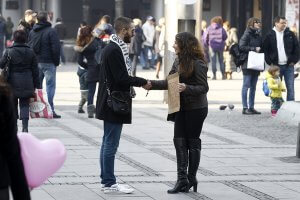 “However, besides the positive, there were also negative experiences.

-You stupid peasant, you think you’re doing something smart? I will fuck everything you have, your job and career and good people that you made look like fools.  – This was what one gentleman told me. I didn’t answer. I don’t blame him, everyone has the right to think what they want.

-Get the fuck out of my town.

-You journalist piece of shit.”

Of course, the story wouldn’t go viral and be so popular if it wasn’t for the negative comments. I’m quite skeptical that anyone would approach this girl just to offend her or that she received these messages. But on the other hand, it’s true that slut-shaming is still present in this region which is the main reason feminist don’t have so much power over here. Thank god for that. 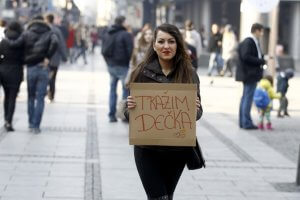 Translation:”I’m looking for a boyfriend”

“Still, there were much more kind and positive things, which is how I can tell that most people realize what actually happened and what I wanted to prove.

Men are gentlemen. There are always exceptions, but what they showed me on the street and later in texts was amazing. There will always be someone that is different, but my faith in prince charming has returned.

As far as the guy that invited me on a tea goes… we did go out together. He was very kind and caring. We talked a lot and will remain in contact. This doesn’t mean that I found a boyfriend because I didn’t look for one, this just means:

Stop looking at your phones, computers, makeup. Girls are beautiful and there is no need to waste time on such things. The same goes for the stronger gender. Laugh, approach each other, be happy, enjoy.
Life is always better with someone.”

The moral of the story? No matter how needy she is, or if she hit the wall, you have to approach her, that’s the world she wants. And how can you be sure that you stay a gentleman like that? Be needy and desperate.

Women can find a boyfriend whenever they want. What they can’t find easy is an alpha boyfriend who won’t commit himself to just anyone, those guys really have value, unlike people who offer their commitment for free.

Competition is desperate. Men are thirsty and commitment is cheap. They don’t respect their time and they are willing to give it for free to any girl out there, no matter how desperate the girl is. Men don’t even ask questions like “is this girl the right one for me?” or “will this girl cheat on me?”, instead they just want to rush into relationship as soon as possible.

This is just a consequence that a big part of our society is raised by a single mother, and we all know where that is leading. I hope this will help you understand how desperate most men are. This post is just another reminder for that. Good luck.