Before you learn how to pick up girls at a club, what you need to know is that women have absolute power, and they literally choose who they want to be with. Of course, you choose which girl you are going to approach, but she chooses will you stay there.

And if you aren’t her type, some other guy that is probably drunk is going to approach her, and if he isn’t good enough, another one will come. So, the first thing that you have to accept is that girls have full power in clubs.

What you should also know is that they spend hours in front of mirrors, doing make-up, hair, looking for cellulite on their body, questioning if they are fat and so on. And at the end, they will still be insecure about their looks. Think about it for a minute, ask yourself how can you exploit that. Those women that say how they go to clubs “just to dance” means they are going to meet someone. Maybe it’s you who they want to meet.

It is important to know how to dress. Women will judge you on first look, and there isn’t too much space to talk in loud clubs, so they will judge based on what they see (lift, lift, lift).

The battle for the club starts earlier

But before you enter the club there is one thing you need to do. As soon as you leave the house, listen to your mind, and what he wants. A lot of times when we walk down the street, and we see a hot chick walk in front of us, our mind suggests that we say something, even if that is one simple “hi”. But we shut down that voice quickly, with the excuse that it is weird, or that “I will open in the club anyway”. Here is the thing, don’t ignore that voice. Simply execute. The first thing you want to do but social pressure is pressing you not to, you have to do it. This way you are warming yourself up and creating momentum for later. Remember, you aren’t saying hi to that chick only because of her, you are doing it for that dream girl that you will pull easily, just because you built momentum on this one.

Let’s say you see a hot chick and at first you want to say hi to her. Your brain tells you “no, it’s too weird”, and you don’t. Then you go to a club and want to ask bouncers if it’s crowded in there, but you are too afraid, and you thought “ah, never mind, I will see it myself soon”. Next thing you know is that waitress put you on a table you don’t like, and you are too scared to tell her how this table sucks and to move you somewhere else.

Now, how on earth are you going to be social club machine with all this negative momentum? Before you know it, you are stuck in your head.
But, there is also positive momentum, after few approaches, it gets easier and easier to approach, the problem we don’t realize is that battle for the club starts earlier when we need to get positive momentum. Maybe it is to ask something in a store, or maybe even some guy for direction. The problem is that every time you want to go out you will have to build momentum from scratch.

Just listen to your voice and do the small things your brain finds excuses not to. Your mind won’t be too cruel to you, he won’t suggest things that you can’t do over to social pressure. He will “propose” you little small things at first, as simple as “hi” on the street just to get you into momentum before the club. So, whatever your brain think that you should do, listen to it and fucking do it.

Be direct in clubs, she already knows what you want

We have now come to the point where you arrive at the club. Now we have to enter the state. When I walk in the club, I do it with a smile on my face every fucking time. Then I stop for 10 seconds, check where the hot chicks are and look for an eye contact. When I get it, I immediately go to her. If I don’t get eye contact, I would still go to her. It is very, very important that you talk to some girl in first 10-20 seconds. She doesn’t have to be a model for you to approach her, she can even be a little fat or ugly.

Also, it doesn’t matter what you say, it’s a nightclub where people go to communicate with each other. Nothing weird about it. When you approach a girl as soon as you come, people wouldn’t know if you actually know her or not. That’s how you take pressure off yourself. Besides, when you are in company with girls, you will get more eye contact with other women. Simple preselection.

In that first set, I usually comment her style or something about her that I noticed. Then I say I can only give her few minutes since friends are waiting and then I will try to isolate her. You should be direct in clubs, she already knows you haven’t approached her to ask what is she studying. And if you fail, it doesn’t matter since the only point of that first approach is to have fun and get social proof. Have a good time, laugh, tease, act your play. That’s why you are there.

So, don’t go to the toilet, don’t go for a drink, just open that first set, be there few minutes, then you can leave and come back later. Of course, if she is responsive and you can escalate, stay there, but this is not common in the first approach and this early in the night.

When you go for a drink, play around with girls at the bar, vibe with them, act if you need, act like you are a stranger, and then tell her you are lying. Just vibe with them. You actually see that the point of a night game is to talk to as many girls as you can in a short period of time. One thing you need to remember, no one takes night game too serious. So why should you? They have all get out that night to have fun, laugh and meet the interesting person (you). The nightclub is like a social gathering, people are there to talk to other people and drink. That’s why you need to relax and play with them. It was always interesting to me to play with their little heads, to see how they will react to different situations.

So look at it like something that should amuse you, something that you will wake up tomorrow and say “that girl’s reaction was hilarious”. Don’t take anything seriously because night game is a farce, and just play your game. Check out top pick-up techniques at the Nightclub.

It’s all one big act in clubs, where everyone wears their favorite mask. 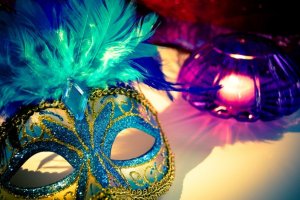 Remember, they are under temperature, and you have to be too, hug them, tell that you will be their best friends tonight, maybe a friend with benefits, make the good atmosphere around you. You could ask girls are they adventures (which means are they here to fuck).

Find some place or corner in the club where you will isolate your targets, where you can take them. She won’t come with you early in the night, but if you like her and she is responsive, you finally found someone to stay with, and then take her there. I usually have that place near the toilet.

Don’t be afraid to open another set when you are already in one, because like I said, it’s all one big act in clubs, where everyone wears their favorite mask. No one gives a fuck. Heck, people even expect you to be like that. It’s all fine.

Raise your temperature, always be doing something, there shouldn’t be pauses in between interactions, talk with a girl, it doesn’t matter what, when you don’t know what to say, dance, be physical. If you have pause more than few minutes, that means you have to practice more and that you aren’t doing club game properly. If you are that type of guy that just chills in the club, and you implement this thing I am talking about, that will be a game changer for you.

As the night goes on, your chances are raising.

Don’t surrender too early. If a girl rejects you in the first couple of minutes, that doesn’t mean you can’t close her one hour later. If she rejects you, try again later. As the night goes on, your chances are raising. No one wants to be alone.

Find your target, and choose between two things. Do you want to pull her that night or to go on a date later? It is very important to choose what you want.

If you want to pull that night, just raise attraction and be physical, kiss close and lead to pull (after party at your place or something like that).

But if you want a date with her that week, one thing comes to my mind, rapport. You have enough time to create rapport. Since attraction is already there, all you need to do is to not kill it. Create rapport with long seductive eye contact, being gently physical, and letting her talk so you can listen. Ask her private interesting things even if she won’t answer at first.

Also, if you want a date, don’t make out with her too much. It’s ok to kiss her on goodbye or even cheek. Don’t focus too much on escalation, but seduction. Because it really doesn’t matter if you kiss her that night or not, it’s even better to not kiss close, you will have bigger chances for a date in my experience.

Picking up girls at a club is easy 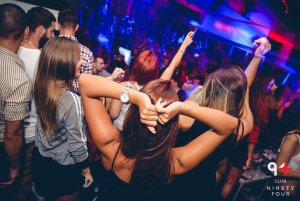 Don’t walk through club looking for prey. Girls in the club are under temperature, and they could leave you after one hour if they choose another guy for whatever reasons.

If you decide to go out alone, you will have better chances. Girls love guys that go solo.

There is actually only one rule when you want to pick up girls at a club. Don’t let yourself be bored. If you are not bored, you won’t be boring. Make fun, talk with everyone.

All in all, when you are at the club, you should feel like you are some kind of light in the darkness. Think like “I am light, I am shining, follow me.” I know it sounds crazy, but it helps.

Alright, let’s summarize. How to pick up girls at a club:

That would be it. Every night you go out, you can choose whether you will be in fear that night or give love. And usually, you decide this at the start. Too good for you that so many guys are scared.

So next time you ask yourself how to pick up girls at a club, don’t waste time being scared and be different by being free.