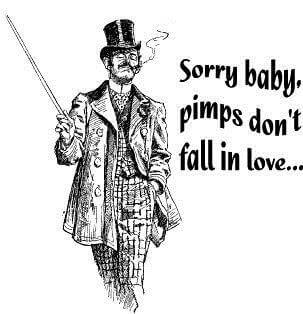 This post is about basics of the PIMP game, the way pimps and players get their women to pay for them. For now, just basics. So, let get straight to the point.

The PIMP motto is: “The first time is always free, next time you have to pay.”

This may sound weird at first so I will try to explain it as best as I can.

The analogy is that we, men, are drug dealers, and women are junkies. How does that work?

Dealers find people that lack something in life and give a sample to them of something that is better than anything in their little, pathetic lives – drug. They also target people that are weak and lack self-discipline. When a new drug comes out, the first example is always free. That’s what lures people in. Drug dealers are selling a dream, “take this for free and you will open gates to a happier, better life, and all of your problems will be solved.” Of course, after people taste that first sample, they always come back for more, but this time they need to give something in return – money.

Being caught in a trap, that they set themselves into, junkies have no other way then to pay for what once they got for free. And that’s how circle begins, from which they can’t pull out.

How can we relate this with seduction?

Easy. You, as a lady slayer, should get into girls world, and shine. You should be better from everything in it, to be the only star in her, by the way, dark sky. And then, just when she thinks that life besides you is perfect, you start to take that sheen back(retreat), maybe even ghost. She will be confused; she won’t know ‘what’s wrong with you.’ And she will agree to anything, just to get that phenomenal feeling back that existed earlier.

And that’s where you have her trapped. Then you are in control. This is basic manipulation in relationships. Give something good, and then take it away without a word. Every girl just loses her mind because of this. She will think about it all day and ask herself questions she can’t answer. This method pimps use to turn an ordinary woman into a prostitute. I wouldn’t go so far, but once you master this, the choice is all yours.

PIMP mostly choose to give women a feeling of security. The best feeling female can get from a man. But if she wants this protection to last she has to pay.

Let’s divide people who play this game into few groups:

PIMP – we all know who are they.

Mack – softer version of PIMP, he doesn’t send his women on the street, he is using them in a way that they are buying him clothes, cars, things, giving him money. In another word, they buy him presents.

Player – he sleeps with a lot of women, but he only has sex with them.

All this that I wrote works, and it is an introduction to manipulation. But in order to shine, you have to be a diamond. You can’t be the star in her life if you are not a diamond, very important.

Before some SJW post a lot of negative comments, and before I get tons of emails, ask yourself isn’t this what women do to men in the first place? Why else would guys buy them presents, take them out for dinner, fight over them, and do a lot of other stupid things? Because of what I just described in this post. Because of a good feeling, they get in small doses, and they want it more.

The best book that introduces the pimp game to you is 21st Century Fox Space Age Pimping. It explains the relationship dynamics and why women are consumers, rather than producers. Why should you be chased rather than a hunter? This book is not PIMP holy bible but it’s the best book to understand the basics on how this game is played. It’s not only connected with women so it describes how can you use PIMP principles to everyday life to improve your control of money, sex, and relationships.

I should tell you that this book is not your average PIMP game book where you will learn how to get women to work for you on the street, this is just an introduction to all this, and a pretty damn good one I must say.

There are a lot of other authors that write about PIMP game and how to “break the bitch” and I will write about that in future.

All human beings do this kind of manipulation, it’s just that most of them don’t do this on purpose. Most people don’t even know they are using this technique, but they do.


As I said, I only gave you information; you do whatever you want with it.