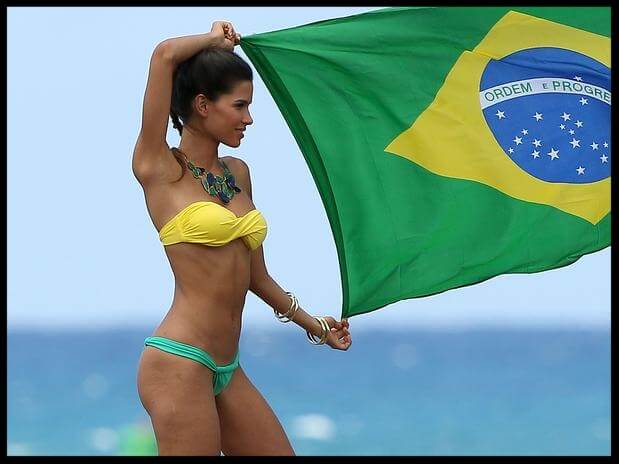 There is no straight man that can stay indifferent to the sexiness of Brazilian women. You can either love them or be afraid of their sexuality. They are definitely the most popular girls of the Latin world, especially in the US.
Rio is known for “sex tourism”, rich Americans are very drawn to the idea of getting laid in Brazil, but is that an easy thing to do? It depends.

Brazil had a record-setting 350,000 divorces in 2011, 45% more than in 2010. But today, the number is probably even higher. Almost all of my friends that stayed in Brazil are now divorced. Why is that? Two reasons. The temptation is too strong, and cheating has become sort of a normal thing to do. In Brazil, husbands normally cheat a lot on their wives, it’s almost a part of the culture. But as the influence of feminism is increasing, women are starting to cheat too.

Your value in the sexual market is mostly determined by how you look. Unlike their women, Brazilian men don’t care too much about their body, that’s why good-looking guys have an advantage over here. If you are a short guy, your success with girls in Brazil will largely be a function of strong persistence with dating apps, knowledge of Portuguese, and being very aggressive.

Foreigners are very well accepted, especially Americans (gringos). To be honest, it’s not like with fucking easy Chinese chicks, where being foreigner is just enough, but being a gringo in Brazil gives you similar benefits. Americans can be seen as a green card and a ticket to a better life, and we are also attractive because we are different.

The country is in a bad economic situation. Corruption is still huge and there are still safety problems in some parts of big cities. And we all know that bad financial situation in a country is an opportunity for every rich foreigner to get attention. While men are mostly working, women are looking for someone who is rich enough, so she doesn’t need to work.

Sex is not a Taboo

When it comes to sex with Brazilian women, society here is very, very open about it. You can walk by the beach at night and see multiple couples getting laid on the beach. They are also very open when they talk about it. A Brazilian woman will tell you if you didn’t satisfy her. There is no chance that she will fake orgasm or something like that.

When you get to Rio, take a deep breath, you should smell sex. I believe that people in Latin America have the most sex compared to the rest of the world. There can be a lot of reasons for that, like climate or the fact that Brazilian women look sexy all the time. She looks sexy when she talks, walks, dances or eats, you will have a hard time not imagining doing crazy things with her in bed.

For some reason, kissing is really nothing special here. A woman would kiss a man even if she doesn’t really like him. They tend to kiss just for fun and before you know it, she disappears. So, be ready for a few kisses. You will see this very often at carnivals or when watching a soccer match with a girl. If her team wins, celebrations are going to be free-loving dynamic.

How to Get Laid in Brazil as an American

It’s always sad to see how gringos expect to get laid at expensive bars and clubs. Firstly, you don’t know how to dance like Brazilians, face it. Second, it’s the worst option to choose if you want to bang something. Stay away from clubs.

But what is the best option?

The best app for getting laid in Brazil is Badoo, without a doubt. It’s an app that’s not so popular in the US, but it’s huge in Latin America. It works similar to Tinder, so you will have an easy time setting up your profile. The thing with Badoo is that you can have way more options if you want to spend money on getting some benefits to your profile. Another thing that I noticed is that girls tend to consider Badoo as a “hooking app” so you won’t have a hard time getting what you want.

If you choose Badoo for your online game, and you are an American, I guarantee success.

Another good way to get Brazilian girls is to approach them on the beach. And just like Mexican women, there is no easier place to meet Brazilian women than on the beach. Brazilian men are very friendly, and the women are open to meeting new people. The good tactic can be to get as many local friends as you can because they will certainly introduce you to the women in their group, bragging about how they have a foreigner as a friend.

Pro tip: Bring an American football with you. Everyone will want to throw it for the first time in their lives. And they usually suck at it so you both can just laugh it out.

You will get flaked, for sure. It’s almost a way of life in Brazil. People love to say “so, let’s get a drink sometimes” almost in every conversation. And they leave it like that until they meet again, no hard feelings. Women are especially flaky, so you will need to confirm the date before you go on one and don’t always expect Brazilian women to confirm that they will indeed show up.

If you know at least basics of Portuguese language, you will have a huge plus over other foreigners. It’s not that hard and it’s well worth it to spend some time learning it if you plan to visit Brazil for a long period of time. You will wish you started to learn this language a few years ago when you meet a gorgeous girl who is interested in you but you just can’t close the deal because of the language barrier.

If you decide to come here, don’t come to find a wife and don’t stay only in Rio. If money is a concern and girls are the only thing you care about, there are way better places than Rio (and probably Brazil for that matter). Try cities in the script between São Paulo, Minas Gerais and Rio de Janeiro.

I’m having a great time in Brazil, I really love exotic countries like this. We can get to the conclusion that Brazil is special, different and has an interesting sexual culture. Getting laid in Brazil is easy, but this it is not a country where you go looking for a wife.